In 1971 Fr José Ellacuría SJ noted the way Taiwan was moving from an agricultural to an industrial society. Many farmhands were leaving for factories in the towns. Since they lacked proper education or support they were faced with disputes over their contracts, unsafe working conditions and suchlike problems. Fr Ellacuría responded by setting up an information desk to undertake research into the problems facing workers in Taiwan, to train union leaders and monitor the government’s labour policies. 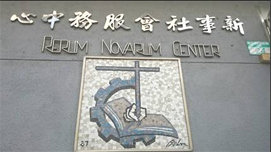 In 1983 the name Rerum Novarum Labour Center was adopted (changing again in 1996 to Rerum Novarum Center). The name was chosen to recall the social teaching of the Catholic Church, which, in its modern form, dates from a letter issued by Pope Leo XIII in 1891 and called Rerum Novarum (Of new things in English). The Center offered legal advisory services, services for workers’ safety and health and published books on workers’ issues. It also offered courses to train trade unionists in labour legislation and in leadership. In the 1980s and 1990s, in addition to the services offered, the director of the Center and his staff and volunteers actively took part in street protests of the time on issues such as workers’ rights, the environment and anti-nuclear power.

In 1996 Fr Ellacuría retired and returned to Spain. Sr Stephana Wei MMB was chosen as the new Director. She continued with support for independent trade unions, weekend reading sessions and the movement against nuclear power. Specialised training was refocused from workers in general, victims of industrial accidents and workers with disabilities to aboriginal workers, migrant workers and service to aboriginal communities. Expansion continued to include further groups of disadvantaged workers such that each year over 2,000 workers and their families received assistance. The number of staff rose from 5 to over 16.

The Center belongs to the Society of Jesus, a Religious Order within the Catholic Church, which makes service to the poor and marginalised its priority. The Center deals directly with particular cases or uses group support to help people of every ethnic group, religion or political party so that they can overcome their difficulties. It also actively seeks to improve labour legislation and organisation of labour. It depends on voluntary contributions for its work.